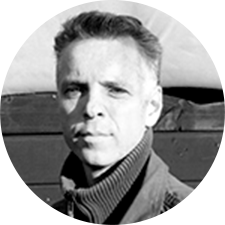 I am the second of two children. Born to be a challenger I guess. Growing up I challenged the usual things: gravity and other people's patience. But soon I learned the greatest satisfaction came from challenging myself. Challenged that I didn't have the co-ordination to row well, I went on to win international medals for Great Britain. Challenged with the notion that art college was a waste of a good education, I turned down places at top universities. Challenged with the observation that big agencies only hired young creative teams, I convinced one to take a risk on me. Challenged that I wouldn't survive at Lintas after the Lowe merger, my work was recognised at D&AD, Cannes, Kinsale & Creative Circle. Challenged with making the Army recruitment work as authentic as possible, I strapped on body armour and went to Afghanistan. Challenged to build an award-winning department at DraftFCB, we lost the agency D&AD cherry in under two years. Challenged to turn around a creatively stagnant agency and work alongside Dave Trott, I joined The Gate, raising the standard and diversity of their creative output in my three years there. Wanting a slightly different challenge, in the autumn of 2016 I took a three month sabbatical to write and illustrate a semi-autobiographical children's book "Taming the Alphabet" which was published in 2017. With that creative itch scratched I took on the challenge of Creative Director at tech agency April Six, where I currently bring my broad B2C experience to their primarily B2B tech client base. I'm learning new things everyday and relish helping take this ambitious agency network further towards realising their creative and commercial vision.

One day, women will achieve equality in tech. At April Six, that day was 18 years ago.