Thoughts on the 2016 HubSpot conference.

This was my first year attending HubSpot’s annual Inbound Conference in Boston, so I had no idea what to expect when I signed up to attend the event solo during the week of the 2016 presidential election.

Many attendees I spoke to questioned why the conference was scheduled during the election. In an email sent before the gathering, HubSpot acknowledged that this was the only available date at the space when they booked it four years ago. Their website graciously included a form to apply for an absentee ballot. 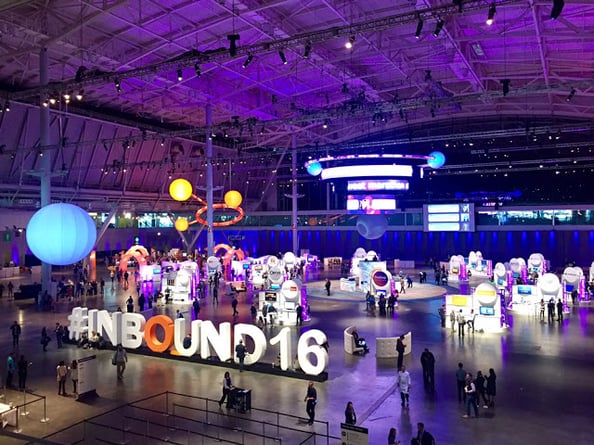 Not surprisingly, the election and its aftermath dominated conversations and emotions; there was really no way to avoid it. I witnessed crowds of conference attendees huddled around TVs, some even crying. I know I’m not alone when I say that I’ve never seen anything like this in response to an election in our country.

The reaction was not limited to attendees. One major headliner canceled and another, Ta-Nehisi Coates, delivered a most memorable keynote. A correspondent for The Atlantic, Coates writes about cultural and political issues that affect African-Americans. Like many in the room, Ta-Nehisi was shocked by the election results and concerned that the country was sliding backwards.

In HubSpot’s defense, the organization never could have predicted what happened; we were all blindsided by the results. Even so, I’m thankful I attended the conference because I saw and experienced so much.

Here are a few key takeaways I came away with:

With more than 19,000 attendees and 300 breakout sessions ranging in topics from sales, digital marketing, and even neuroscience over four days, there is something of interest for everyone. Overall, the event was well-organized, with free shuttles, speakers, and, of course, entertainment. Those who couldn’t get into some of the discussions they wanted to or were unable to attend, can view this year’s most popular keynotes here.

The election results ignited many discussions of “Women power” during the conference. Most of my new acquaintances were women, and it felt really good to know that we “had each other’s backs.”

As women, we must be prepared to meet our own challenges, both in and out of the workplace, while coming together to create more opportunities for those younger than us. As Alexia Vernon mentioned in her discussion about women’s leadership, “Men are perceived to be more leader-like…Our society needs to reset our thinking and behavior in order to do away with gender bias.”

“Impostor syndrome is healthy…it makes you human and keeps you humble.” — Serena Williams

HubSpot did a great job attracting great speakers for the sessions including Alec Baldwin, Serena Williams, and Anna Kendrick. Regardless of their level of fame, many of the speakers alluded to the voice inside of us that occasionally tries to tells us that we’re not good enough, qualified enough, etc. When asked specifically about self-doubt, Serena Williams replied, “Impostor syndrome is healthy…it makes you human and keeps you humble.”

But giving in to that little voice will only result in failure. Personal growth requires a positive mindset, a commitment to risk-taking and no fear of feeling uncomfortable. I recently came across a wonderful quote by Natalie MacNeil that nails this point: “The desire to stay comfortable can keep you from growing and fulfilling your highest potential on this planet.”

Like many other MarTech companies, HubSpot is betting big on social, particularly Facebook and Instagram. As HubSpot CEO Brian Halligan said, Mark Zuckerberg is “eating the world.”

Facebook offers hyper-targeted advertising that can accommodate any marketing budget. With the current push for users to embrace Facebook Live, the future looks bright for social advertisers.

5. Brand matters more than ever

“I didn’t buy this shoe because Nike cookied me then showed me a banner ad. I bought it because of the brand.” — Gary Vaynerchuk

While making an important point about the power of creative and branding, author and entrepreneur Gary Vaynerchuk took off his Nike sneaker, held it above his head, and announced “I didn’t buy this shoe because Nike cookied me then showed me a banner ad. I bought it because of the brand.”

The fixation on data often results in the detriment of creative. That creative spark is very important for marketers, and there has to be a healthy balance.

6. The bots are coming

“Chatbots are humans to the bot power that allow us to amplify what we can do.”

As a business development professional, my job requires that I attend a lot of conferences and events, where I’m seeing the emergence of artificial intelligence (AI) as an important topic. It’s not uncommon to see a nerdy developer step on stage and mumble his way through another presentation on “Why AI matters.” Yet few audiences find relevance or real value in the story.

One such Inbound presentation proved to be different. Dharmesh Shah, founder and CTO of HubSpot, introduced us all to the intersection of marketing and AI in the form of HubSpot’s new project GrowthBot. Shah explained that “Chatbots are humans to the bot power that allow us to amplify what we can do.”

GrowthBot is a chatbot for sales, growth, and marketing teams that connects to a variety of marketing systems. GrowthBot will connect artificial intelligence and machine learning with HubSpot’s existing systems. Questions/topics answered by GrowthBot include:

Hubspot’s Shah believes that chatbots are the “biggest wave” of technology innovation to emerge in the past two decades, an idea that has been echoed recently by publications including Wired.

7. Laughter really is the best medicine

Finally, the appearance of comical (and somewhat controversial) performers served as a much-needed respite from the election.

During her skit, standup comic Ali Wong performed pieces from her funny "Baby Cobra" Netflix special - challenging ways in which society stereotypes moms and dads, and shocking some in the audience with her raw insights on motherhood. "This is why women need maternity leave", she shouted. As I laughed tears of joy, the stranger next to me looked over and said, "It feels good to laugh again."

Thankfully, Inbound 2016 was devoid of the pomp that pervades many professional conferences. With daily events like yoga sessions, “pitch-offs,” happy hours, and, even, comedy performances, the event was unlike any conference I’d ever attended. I plan to return again next year, a little less preoccupied with politics. I hope to see you there as well.