How the election helped us rethink our social responsibility.

The morning after the presidential election came earliest for our U.S. Managing Director Jill Melchionda, who was working in the agency’s U.K. headquarters. The surprising results were announced as her day started, and she felt uncomfortably disconnected from her San Francisco team.

In a few hours she received a text from Creative Director Tom Lucente. “We need to do something,” he wrote.

Political persuasions aside, Jill and Tom instinctively understood how the election results would affect not only the staff in San Francisco but also the entire city, a traditionally progressive enclave where fewer than 10% of voters supported the president-elect. In brief, much of the populace was stunned and depressed.

San Francisco had also voted on ballot measures that will negatively affect the city’s homeless population. The passage of Proposition Q makes it illegal for people to pitch tents on city sidewalks. The rejection of Proposition S meant that a significant portion of San Francisco’s hotel tax revenue will not go to family homeless and arts programs in the city. (However, Proposition J passed—setting aside $150 million a year for homeless and transportation improvement services).

The plight of the homeless—those down on their luck, many plagued by addiction and/or mental illness, others social outcasts, more and more simply unable to afford housing—is an endlessly controversial topic in our town. The San Francisco Chronicle even has a prize-winning team of writers and editors dedicated to reporting on the issue.

Janet had a light bulb moment: “Let’s hand out food to hungry people who live on the street.”

We closed up shop early and headed downtown. It didn’t take long to hand out dozens of hand-prepared lunch bags—each filled with peanut butter and jam sandwiches, an apple, a bottle of water, napkins, and a bar of soap. “In my experience, homeless people really appreciate soap,” said Ansley Dunn, one of our account directors and also director of operations for Helm Soccer, whose mission is to “enhance the lives of America's youth by maximizing their soccer potential and giving back to local and national charities.”

It was an otherwise small, random act of kindness. But it was still an action. Collectively, we believed that was far better than no action. 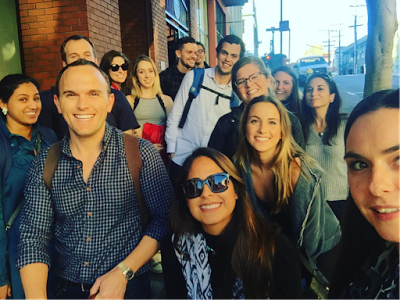 April Six is committed to being a socially responsible organization. In fact, our efforts the day after the election were a demonstration of one of our most important core values: We’re a loyal, empathetic bunch. To that end, Janet has also initiated a partnership with the St. Anthony Foundation, one of San Francisco’s most respected social services organizations. The group has a fantastic story: From its beginnings in 1950 as a soup kitchen, St. Anthony now offers a free clothing program, a medical clinic with a free pediatrics, housing services, a licensed, no-fee residential substances rehabilitation program, and a variety of educational programs—all dedicated to assisting the city’s most vulnerable residents, especially those without shelter.

“It’s the way they do things,” Janet said. “There’s a big difference between shoveling out food on paper plates and having people sit on the floor in a dimly lit room—and having a warm, nicely furnished, well-lit dining room where they can eat in a dignified manner.”

Janet says she would love for April Six to mirror its CSR efforts after those of JPMorgan Chase or the Bill & Melinda Gates Foundation—although admittedly we’re not quite at that scale yet.

“The Gates Foundation and Chase understand that there is an ROI to helping people in a thoughtful, systematic, measurable way,” Janet said. “It’s not just about doing something to make yourself feel good. I truly believe that if you want to live in a safe country, then you need to make sure that everybody is safe. That means they’re not hungry, they have a place to sleep, they learn skills to get a job, and they have access to services to break the cycle of addiction.”

During our impromptu lunch giveaway the day after the election, we found no shortage of willing recipients. Many were visibly grateful; others kept their gaze toward the sidewalk as they accepted the lunch bags, barely acknowledging the interaction.

Off in an alley, one man in dirty pants, dirty shirt and socks without shoes sat awkwardly on a curb, his back to the street as he cupped an object in his left hand, sucking on it while flicking a lighter with his right. Three similarly disheveled men hovered nearby. Approached by an April Six staffer, all three accepted the brown bags. We collectively decided not to disturb the man and, instead, walked away.

Just then, Art Director Tony Landgraf—a lanky, wildly talented, happy-go-lucky sort—abruptly turned around, cautiously approached the otherwise occupied man, and asked him if he wanted lunch. The offer was accepted.

“I just didn’t want him to feel left out,” Tony said, shrugging his shoulders.

It was an action, far better than no action.